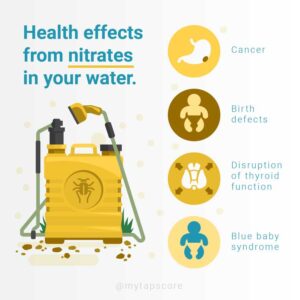 If my water is contaminated, I will know, right?

Nitrite and nitrate are two such contaminants, but they are associated with serious health risks, especially for infants and pregnant women. A total of 2 million people were served water that exceeded public health guidelines for nitrite and nitrate in 2015.

There are many routes by which nitrite and nitrate can reach drinking water, and several options to prevent and treat contaminated water–Tap Score’s guide to understanding this stealthy pollutant covers the basics.

What are Nitrites and Nitrates?

Nitrite and nitrate are naturally produced in soil by nitrifying bacteria. A complex process called “nitrification” causes nitrites to form into nitrates, which is part of the complex but fascinating nitrogen cycle. Nitrites and nitrates have many other sources as well, including the atmosphere, agricultural runoff, and wastewater discharges.

As far as human activities, both compounds are important component of fertilizers. With the scale of today’s agricultural activity outpacing any other land use in the US, it is now even more abundant in soils all over the world. In industry, both nitrite and nitrate salts are used in meat-curing processes.

Although nitrite is a drinking water contaminant, most nitrite present in water is rapidly converted to nitrate. For this reason, we talk about “nitrate contamination”, which includes nitrite as a source.

How Do Nitrates Affect My Health?

The EPA deems nitrite and nitrate (measured as nitrogen) safe in water at levels below 1 and 10 parts per million, respectively. However, other countries have maximum levels for nitrate that are twice as strict as the EPA standards and some argue that the US should lower the maximum allowed levels. While there are several health risks from consuming too much nitrate–methemoglobinemia (also known as blue baby syndrome)–is one of the biggest risks.

Methemoglobinemia:
After ingestion, the human body reduces nitrate to nitrite. Nitrite then converts normal hemoglobin (Hb), a protein in blood that transports oxygen to bodily tissues, to methemoglobin (metHb), which cannot transport oxygen. Thus, high concentrations of nitrates in drinking water can cause a condition called methemoglobinemia – leading to critical oxygen deficiency in the body.

Methemoglobinemia can lead to cyanosis, a skin discoloration, or even asphyxia – suffocation – at high concentrations.

In adults, a very high concentration of nitrate (unlikely to be consumed) is necessary to result in methemoglobinemia. Infants produce nitrite faster and are less resistant to its effects than adults. Methemoglobinemia is often referred to as “blue baby syndrome” because infants impacted by it can appear blue from lack of oxygen.

Blue baby syndrome is also a risk to fetuses in utero, so pregnant mothers are should test their water for nitrates especially if they live near agricultural lands and rely on private wells.

There are several other health risks associated with nitrate in water, including thyroid issues, birth defects, and cancer.

How do Nitrates Get in My Drinking Water?

Nitrites and nitrates can enter your drinking water from a variety of sources. Your exposure pathway and solutions are different, as you might expect, if you get your water from a water system or a private well.

Public Water System
The highest risk of contamination is from nitrates in private wells, though hundreds of thousands of Americans are exposed to nitrates in public water systems. EPA found that water systems violating the 10 mg/L MCL for nitrates has actually been increasing. Water systems often rely on their own groundwater wells for source water, meaning nitrites and nitrates enter water treatment plants similarly to the way they might for a private well.

Nitrates and nitrites are readily mobilized in water. As excess levels are often applied to land for growing crops and livestock manure may not be properly managed, nitrates readily run into groundwater pumped up by wells.

What Should I Do About Nitrate in My Water?

Testing:
Nitrate and nitrite are colorless, odorless, and tasteless compounds. That means they are impossible to detect without laboratory testing.

The first step is to test your water. Tap Score’s well water and city water tests all include a nitrate screen. If you are in an at-risk environment (e.g. near agriculture), we recommend a higher-resolution test for nitrate (again, this is the most common form in your water and is measured as nitrogen). You might also consider testing for nitrifying and denitrifying bacteria.

Solutions:
If you find nitrates in your drinking water source, and you have an infant, do not feed your infant formula with the drinking water.

You will likely need to treat your water by installing an at-home treatment system such as those involving reverse osmosis, ion exchange, or distillation. Unless you are regularly testing the safety of your water treatment system, however, it is recommended that you do not use the water source with infants under six months old.

If you have a private well, you should have it inspected and check the casings and fittings – any damage could enable seepage from shallow groundwater containing nitrates.

Finally, remove any potential sources within close proximity to the well–e.g. improperly managed animal manure or fertilizer use.

Assuming you do not currently have a detailed water lab report of the top 35 – 50 Contaminants in your well, the next step might be to test your water using a certified laboratory. The final report will be emailed to you giving you all the required info needed to contact Pure Water Solutions (541-890-2751) for a Professional no obligation consultation and detailed Guaranteed filtration quote, if needed.

If you are concerned or worried about nitrites or nitrates in your water, please contact Pure Water Solutions.

We can make any water Perfect – Guaranteed.

We use environmentally safe high-tech filtration systems with both the industry’s top digital control valve and advanced medias. Our systems last 25 – 30 years, have a 10 Year warranty and are virtually maintenance free filtered water without paying for a lifetime of ongoing annual service calls. All our systems are installed by a Licensed Plumber.

We are proud to provide service to the following Southern Oregon communities: