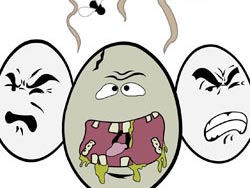 Hydrogen sulfide gas (H2S) can occur in wells anywhere including well water here in Southern Oregon. At concentrations present in household water it is usually not a health risk — except in very high concentrations — but it give water that “rotten egg” taste or odor.

The article below is detailed and informative to help you better understand why your water smells like rotten eggs.  Please do not hesitate to call if you have any questions or need detailed information about your current situation.

Reprinted from an article by the Minnesota Rural Water Association.

Hydrogen sulfide gas (H2S) can occur in wells anywhere in Minnesota, and gives the water a characteristic “rotten egg” taste or odor. This brochure provides basic information about hydrogen sulfide gas and sulfur bacteria and discusses actions that you can take to minimize their effects.

What are the sources of hydrogen sulfide in well water and the water distribution system?

Hydrogen sulfide gas can result from a number of different sources. It can occur naturally in groundwater. It can be produced by certain “sulfur bacteria” in the groundwater, in the well, or in the water distribution system. It can be produced also by sulfur bacteria or chemical reactions inside water heaters. In rare instances, it can result from pollution. The source of the gas is important when considering treatment options.

In most cases, the rotten egg smell does not relate to the sanitary quality of the water. However, in rare instances the gas may result from sewage or other pollution. It is a good idea to have the well tested for the standard sanitary tests of coliform bacteria and nitrate. Sulfur bacteria are not harmful, but hydrogen sulfide gas in the air can be hazardous at high levels. It is important to take steps to remove the gas from the water, or vent the gas to the atmosphere so that it will not collect in low-lying spaces, such as well pits, basements, or enclosed spaces, such as well houses. Only qualified people who have received special training and use proper safety procedures should enter a well pit or other enclosed space where hydrogen sulfide gas may be present.

Are there other problems associated with sulfur bacteria or hydrogen sulfide?

Yes. Sulfur bacteria produce a slime and can promote the growth of other bacteria, such as iron bacteria. The slime can clog wells, plumbing, and irrigation systems. Bacterial slime may be white, grey, black or reddish brown if associated with iron bacteria. Hydrogen sulfide gas in water can cause black stains on silverware and plumbing fixtures. It can also corrode pipes and other metal components of the water distribution system.

What causes hydrogen sulfide gas to form in groundwater?

Decay of organic matter such as vegetation, or chemical reactions with some sulfur-containing minerals in the soil and rock, may naturally create hydrogen sulfide in gas in groundwater. As groundwater moves through soil and rock formations containing minerals of sulfate, some of these minerals dissolve in the water. A unique group of bacteria, called “sulfur bacteria” or “sulfate-reducing bacteria” can change sulfate and other sulfur containing compounds, including natural organic materials, to hydrogen sulfide gas.

How is hydrogen sulfide gas produced in a water heater?

How can I find the source of a hydrogen sulfide problem, and what can I do to eliminate it?

The odor of hydrogen sulfide gas can be detected in water at a very low level. Smell the water coming out of the hot and cold water faucets. Determine which faucets have the odor. The “rotten egg” smell will often be more noticeable from the hot water because more of the gas is vaporized. Your sense of smell becomes dulled quickly, so the best time to check is after you have been away from your home for a few hours. You can also have the water tested for hydrogen sulfide, sulfate, sulfur bacteria, and iron bacteria at an environmental testing laboratory. The cost of testing for hydrogen sulfide ranges from $20 to $50 depending on the type of test.

What can I do about a problem water heater?

Unless you are very familiar with the operation and maintenance of the water heater, you should contact a water system professional, such as a plumber, to do the work.

CAUTION: Increasing the water heater temperature can be dangerous. Before proceeding, consult with the manufacturer or dealer regarding an operable pressure relief valve, and for other recommendations. Be sure to lower the thermostat setting and make certain the water temperature is reduced following treatment to prevent injury from scalding hot water and to avoid high energy costs.

What if sulfur bacteria are present in the well, the water distribution system, or the water softener?

What if hydrogen sulfide gas is in the groundwater?

The problem may only be eliminated by drilling a well into different formation capable of producing water that is free of hydrogen sulfide gas or connecting to an alternate water source, if available. However, there are several options available for treatment of water with hydrogen sulfide gas.

Other related references that are available from MDH include:

Source: Minnesota Department of Health Fact Sheet/Brochure “Why Does My Water Smell Like Rotten Eggs? Hydrogen Sulfide and Sulfur Bacteria in Well Water”

If  you are concerned or worried about the water quality in your home, please contact Pure Water Solutions.

As Southern Oregon’s most trusted and reliable company for water filtration and treatment solutions, we are proud to provide service to the following Oregon communities: